Schaeffler introduced the “Expanded calculation of the adjusted rating life” in 1997. This method was standardised for the first time in DIN ISO 281 Appendix 1 and has been a constituent part of the inter­national standard ISO 281 since 2007. As part of the international standardisation work, the life adjustment factor aDIN was renamed as aISO but without any change to the calculation method.

Fatigue theory as a principle

The basis of the rating life calculation in accordance with ISO 281 is Lundberg and Palmgren's fatigue theory which always gives a final rating life.

However, modern, high quality bearings can exceed by a considerable margin the values calculated for the basic rating life under favourable operating conditions. Ioannides and Harris have developed a further model for fatigue in rolling contact that expands on the Lundberg and Palmgren theory and gives a better description of the performance capability of modern bearings.

The method “Expanded calculation of the adjusted rating life” takes account of the following influences: 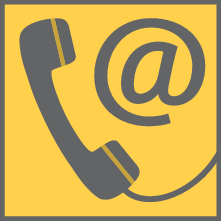 The influencing factors, especially those relating to contamination, are extremely complex. A great deal of experience is essential for an accurate assessment. As a result, please consult Schaeffler for further advice.

The tables and diagrams in this chapter can only give guide values.

The required size of a rolling bearing is dependent on the demands made on its:

The fatigue behaviour of the material determines the dynamic load carrying capacity of the rolling bearing.

The fatigue life is dependent on:

The basic dynamic load rating C applies to rotating rolling bearings. It is:

The basic dynamic load rating C is that load of constant magnitude and direction which a sufficiently large number of apparently identical bearings can endure for a basic rating life of one million revolutions.

Calculation of the rating life

The methods for calculating the rating life are: 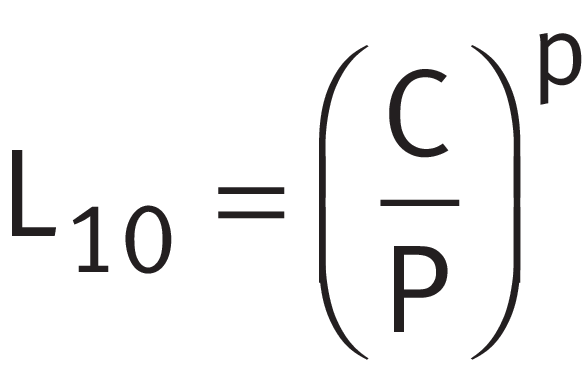 If the load and speed are not constant, equivalent operating values can be determined that induce the same fatigue as the actual loading conditions.

The equivalent dynamic load P on a bearing subjected to combined load (with a radial and axial load) is calculated in accordance with ➤ Equation.

In axial bearings with α = 90°, only axial loads are possible

In axial bearings with α ≠ 90°, axial and radial loads are possible

The calculation of the expanded adjusted rating life Lnm was standardised for the first time in DIN ISO 281 Appendix 1 and included in the global standard ISO 281 in 2007. It replaces the previously used adjusted rating life Lna. Computer-aided calculation to DIN ISO 281 Appendix 4 has been specified since 2008 in ISO/TS 16281 and standardised in DIN 26281 since 2010.

The expanded adjusted rating life Lnm is calculated in accordance with ➤ Equation.

The values for the life adjustment factor a1 were redefined in ISO 281:2007 and differ from the previous data ➤ Table.

Influences on the life adjustment factor

In accordance with ISO 281, EP additives in the lubricant can be taken into consideration in the following way:

For practical purposes, the life adjustment factor should be restricted to aISO ≦ 50. This limit value also applies if eC · Cu/P ＞ 5. For a viscosity ratio κ ＞ 4, the value κ = 4 should be used; if κ ＜ 0,1, the calculation is not valid.

The life adjustment factor aISO can – depending on the bearing type – be determined from ➤ Figure to ➤ Figure.

The viscosity ratio κ is an indication of the quality of lubricant film formation ➤ Equation. 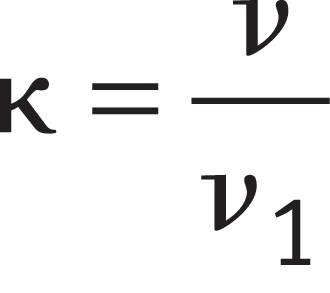 The reference viscosity ν1 is determined from the mean bearing diameter dM = (D + d)/2 and the operating speed n ➤ Figure.

In the case of heavily loaded bearings with a high proportion of sliding contact, the temperature in the contact area of the rolling elements may be up to 20 K higher than the temperature measured on the stationary ring (without the influence of any external heat sources).

In accordance with ISO 281:2007, the equations ➤ Equation and ➤ Equation can also be used in approximate terms for synthetic oils, such as oils based on synthetic hydrocarbons (SHC) for example.

The life adjustment factor for contamination eC takes account of the influence of contamination in the lubrication gap on the rating life ➤ Table.

The rating life is reduced by solid particles in the lubrication gap and is dependent on:

Due to the complex interactions between these influencing factors, it is only possible to give approximate guide values. The values in the tables are valid for contamination by solid particles (factor eC). No account is taken of other contamination such as that caused by water or other fluids. Under severe contamination (eC → 0) the bearings may fail due to wear. In this case, the operating life is substantially less than the calculated life.

In order to prevent damage due to slippage, a minimum radial or axial load must be applied to the bearings ➤ Table.

The rating life equations assume a constant bearing load P and constant bearing speed n. If the load and speed are not constant, equivalent operating values can be determined that induce the same fatigue as the actual loading conditions.

The operating values calculated here already take account of the life adjustment factors aISO. They must not be applied again when calculating the adjusted rating life.

If the load and speed vary over a time period T, the speed n and the equivalent bearing load P ➤ Equation and ➤ Equation are calculated as follows. If only a basic rating life is to be calculated, the terms 1/aISO can be omitted from the equations ➤ Equation to ➤ Equation. 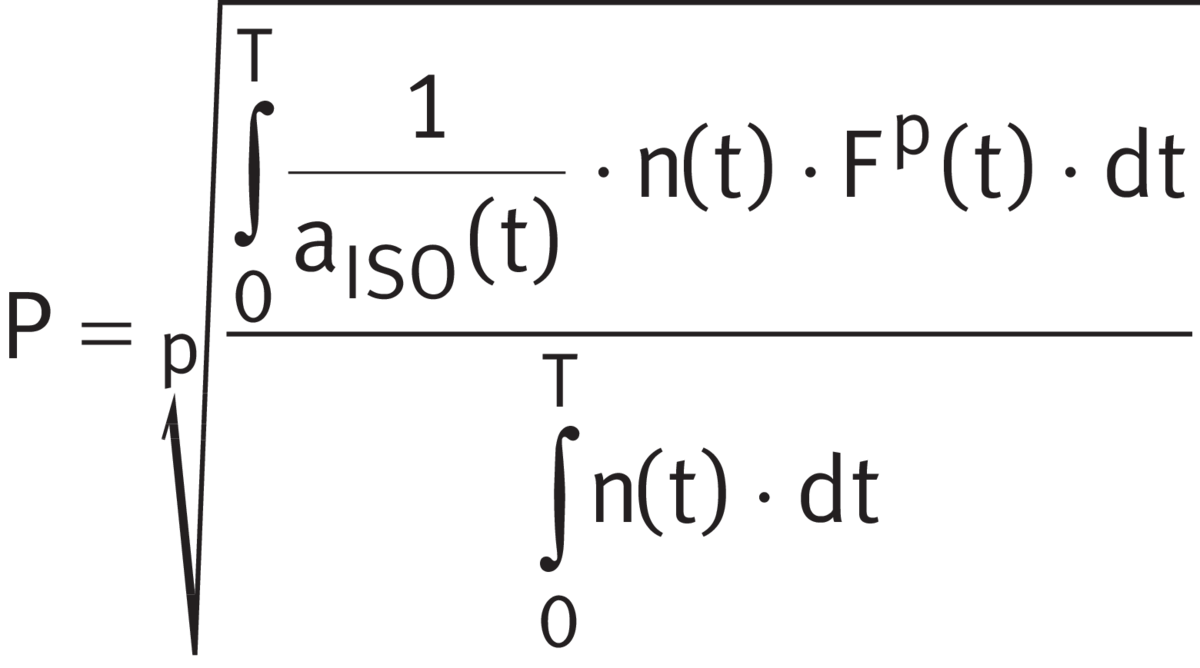 If the load and speed vary in steps over a time period T, n and P are calculated as follows ➤ Equation and ➤ Equation.

If the function F describes the variation in the load over a time period T and the speed is constant, P is calculated as follows ➤ Equation.

If the load varies in steps over a time period T and the speed is constant, P is calculated as follows ➤ Equation.

If the speed varies but the load remains constant, the following applies ➤ Equation.

If the speed varies in steps, the following applies ➤ Equation.

The equivalent speed is calculated in accordance with ➤ Equation.

If the swivel angle is smaller than twice the pitch angle of the rolling elements, there is a risk of false brinelling.

The values for the recommended rating life are guide values for normal operating conditions ➤ Table to ➤ Table. In addition, the tables give the operating life values that are usually achieved in practice at various mounting locations.

Do not overspecify the bearings, otherwise it may not be possible to observe the requisite minimum load. Recommended minimum load ➤ section and product chapter.

If high, static or shock loads occur, the raceways and rolling elements may undergo plastic deformation. This deformation limits the static load carrying capacity of the rolling bearing with respect to the permissible noise level during operation of the bearing.

If a rolling bearing operates with only infrequent rotary motion or completely without rotary motion, its size is determined in accordance with the basic static load rating C0.

In accordance with DIN ISO 76, this is:

The basic static load rating C0 is that load under which the Hertzian pressure at the most heavily loaded point between the rolling elements and raceways reaches the following values:

Under normal contact conditions, this load causes a permanent deformation at the contact points of approx. 1/10 000 of the rolling element diameter.

In addition to dimensioning on the basis of the fatigue life, it is advisable to check the static load safety factor. Guide values and shock loads occurring during operation in accordance with ➤ Table must be taken into consideration. 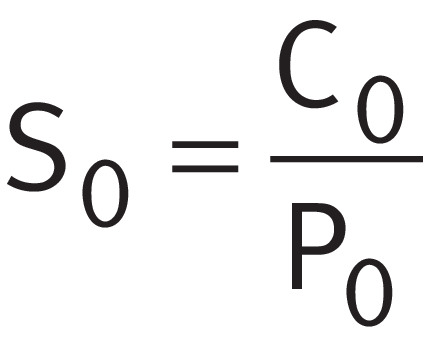 The equivalent static load P0 is a calculated value. It corresponds to a radial load in radial bearings and a concentric axial load in axial bearings.

P0 induces the same load at the centre point of the most heavily loaded contact point between the rolling element and raceway as the combined load occurring in practice.

The operating life is defined as the life actually achieved by the bearing. It may differ significantly from the calculated life.

This may be due to wear or fatigue as a result of:

The operating life cannot be calculated

Due to the wide variety of possible installation and operating conditions, it is not possible to precisely predetermine the operating life. The most reliable way of arriving at a close estimate is by comparison with similar applications.